Between Oedipus and the Sphinx: Freud and Egypt

Twenty years ago, I visited the ancient Egyptian city of Amarna with a party of American journalists. Even in those days this place, near Asyut on the Middle Nile, was regarded as a dodgy destination for western tourists. As a tribute to the value of an entire CBS television crew as a terrorist target, we were accompanied by a squad of heavily armed, black-clad Egyptian special forces. But the sense of daring adventure was dented when, shortly after arriving at the ruins, we were joined by a couple of intrepid Germans who had come in a taxi.

The Germanic world has long been fascinated by Amarna and its ruler, the pharaoh Akhenaten — which is why many of the best finds from the place are in Berlin — and none more so than the founder of psychoanalysis. That much is clear from an intriguing little exhibition, Freud and Egypt, at the Freud Museum, Hampstead.

Akhenaten features prominently in one of Sigmund Freud’s last books, Moses and Monotheism, published in 1939 while he was living in exile in London. In this Freud argued — startlingly — that the prophet, rather than being Jewish, was actually an ancient Egyptian noble. And, furthermore, that Jewish monotheism was derived from Akhenaten’s cult of the sun god, Ra, who was the only deity venerated at Amarna.

It is fair to say that few have been convinced by this thesis. Rowan Williams, the ex-Archbishop of Canterbury, rather tartly described the idea as ‘painfully absurd’. But being wrong is not the same as being uninteresting, and Freud’s Egyptomania is an absorbing theme. 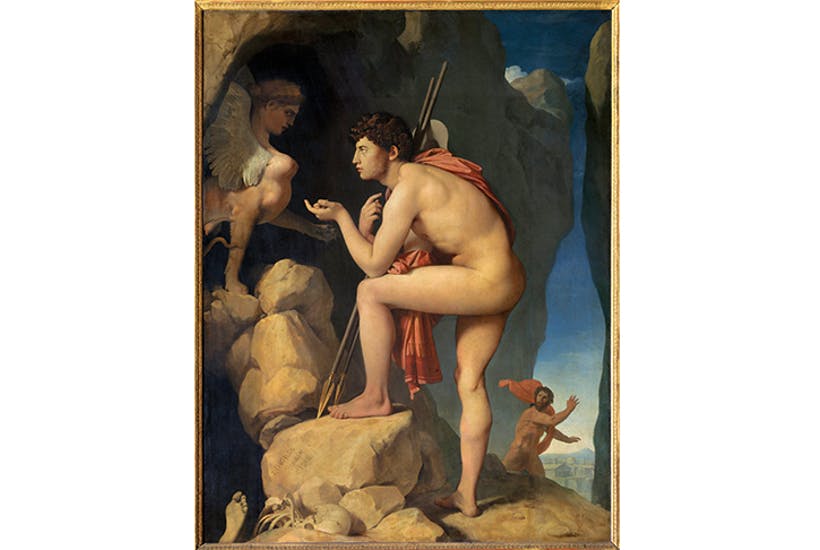 Akhenaten, who ruled in the mid-14th century BC, is full, you might say, of Freudian possibilities. Why, for instance, was he represented as a weirdly androgynous figure, with wide hips and almost feminine breasts? A pair of statuettes in the exhibition of the Pharaoh and his queen Nefertiti show them with almost interchangeable bodies. This is not the standard notion of a regal physique.

Did Akhenaten actually look like this, perhaps, as some scholars suggest, for medical reasons? Or was it because he believed that the great god Ra and everybody else was simultaneously male and female (an unexpectedly 21st-century idea). At any rate it’s not hard to see why Freud was obsessed by Akhenaten, and by things Egyptian more generally.

He was an enthusiastic — you could even say compulsive — collector of antiquities. The shelves and display cupboards of his study and consulting room are filled by a dense clutter of archaeological bric-à-brac: Greek, Chinese, Roman and — most of all — Egyptian. There is more in the show.

An essay in the exhibition catalogue presents various, rather psychoanalytical explanations of this, suggesting that these objects averted fears of his mother’s death or calmed him down in some way. Of these the most plausible is: ‘Because the objects inspired him and filled him with ideas for his work.’

The macabre rituals, the mummy wrappings, the hieroglyphs and above all the Egyptian pantheon of partly animal deities must have seemed like a thesaurus of the unconscious mind, abounding with Freudian symbols. In his library there is an etching of the Sphinx at Giza, with a human head and the body of a lion. Over his desk there was a reproduction of Ingres’s painting ‘Oedipus and the Sphinx’, in which the creature, though retaining sharp claws, has become voluptuously female, the seductive, dangerous incarnation of an Oedipus complex. It’s no surprise that the surrealists revered Freud. Salvador Dali came to pay his respects soon after he arrived in London in 1938 (a portrait sketch of Freud by Dali hangs in the hall).

The sphinx, of course, posed a riddle. So, too, for Freud did the human mind, and especially its dreams. When he psychoanalysed himself he recalled an ‘anxiety dream’ he had had as a child of eight or so. To his horror, the young Sigmund seemed to see his sleeping mother being carried by ‘strangely draped and unnaturally tall figures’. These phantoms had the heads of birds. It sounds just like a picture by Dali or Max Ernst.

The exhibition is best taken as a supplement to a visit to Freud’s study itself, which includes the celebrated couch on which his patients reclined on a sort of nest of luxuriantly patterned Middle Eastern textiles. This room is not only a time capsule, but one moved bodily from early 20th-century Mitteleuropa. The furniture and fittings — transported from Vienna in 1938, when the 82-year-old Freud and his wife Martha escaped the Nazis — would provide rich material for a book entitled Psychoanalysis and the Interpretation of Interior Decoration. Why he was so fascinated by the land of the Nile would be a good place for it to start.